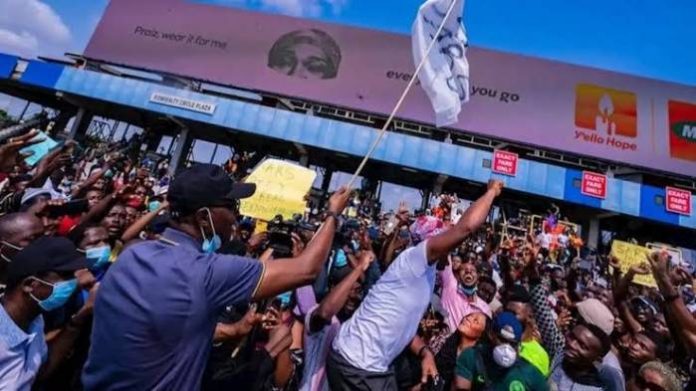 There were strong indications on Tuesday that the Federal Government had begun a clampdown on promoters of #EndSARS protests by freezing their bank accounts, The PUNCH reported.

It quoted some #EndSARS promoters, as saying their banks informed them that the Central Bank of Nigeria had directed that their accounts should be frozen.

Recall that youths across the country took to the streets for the most part of last month in protest, calling for the disbandment of the Special Anti-Robbery Squad (SARS) and an end to Police brutality in the country.

According to The PUNCH, some promoters of the protests tagged #EndSARS, said their accounts had been frozen for the past two weeks.

The CBN, according to multiple complaints received by the paper, reportedly instructed banks to place a ‘Post No Debit’ restriction on the accounts.

The banks, it was learnt, were able to implement the directive by tracking the ‘narration’ of transactions.

Bank transactions that included the narration #EndSARS or End SARS were immediately flagged while such accounts receiving funds were frozen.

A pharmacist, Bassey Israel, who was in charge of the #EndSARS medical team in Port Harcourt, said his account with Access Bank marked 003397XXXX had remained frozen since October 15.

According to him, when he learnt of the development, he went to the bank to find out the reason for it. Israel said he was informed by a bank officer that the directive came from the apex bank.

He said, “I am in charge of End SARS medical team in Port Harcourt and we had people donating for medical supplies, food, water, ambulance services and these donations were made directly into my account and of course these donations had End SARS descriptions so I think that was how they were able to flag my account. I noticed that on October 15, I was trying to make a debit transaction on my account and noticed that there was a restriction.

“So, I called the bank and I was told that there was indeed a restriction but I should go to any branch near me and when I did so, the branch manager sent a mail to the branch where I opened the account. The response to the mail was that there was a directive from the CBN to restrict the account.

When asked if others had similar problems, Israel said, “I know many persons that have this same challenge.”

Israel said the money in the frozen account was a substantial sum.

Another #EndSARS protester also disclosed that she had not been able to access her account and had been informed that it was frozen.

She, however, wished to remain anonymous for fear of being victimised by the government.

The acting Spokesman for the CBN, Abdulmumin Isa, who was first contacted last week on the telephone, asked the correspondent to give him some time.

However, after one week of waiting, Isa had yet to provide any information on the matter.

READ  Minister Of State, Labour And Employment, Keyamo May Resign After Recruitment Of 774,0000
Tags: ENDSARS, Skynewspaper

Hon. Tajudeen Obasa Commissions Solar Boreholes of Its Kind In The History Of Ojo Fed. Const

Hon. Tajudeen Obasa Commissions Solar Boreholes of Its Kind In The History Of Ojo Fed. Const